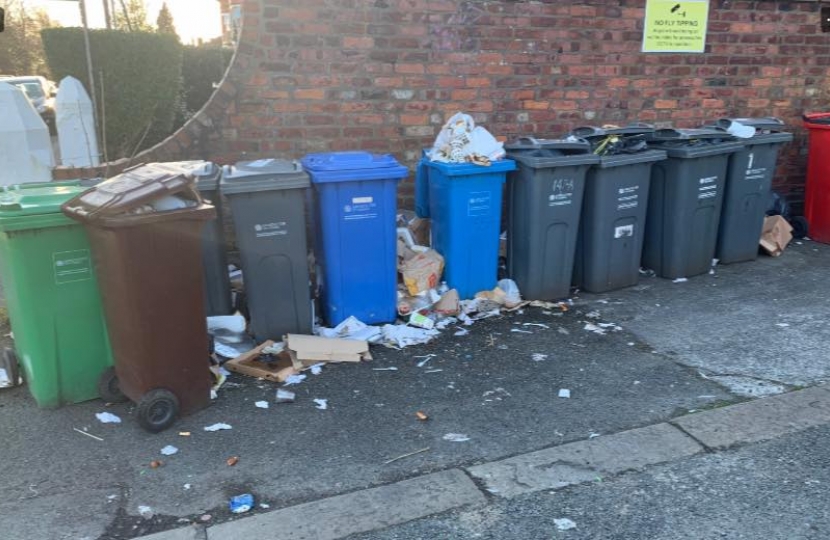 Refuse strewn across the streets, graffiti daubed on crumbling walls, areas so crime-ridden you would never want to walk around them at night, our once beautiful parks in a state of decay, our once magnificent heritage left to rot...

Under the Labour council - prioritising the objectives of international investors over those of the people of Manchester - the city centre has boomed, but that concentration of investment has been at the cost of leaving behind hundreds of thousands of ordinary Mancunians in areas of deprivation and neglect ringing the city centre.

How many times have you read about a housing scheme in Manchester City Centre in which no affordable housing whatsoever is included, or where the investment company intend to create affordable housing only in the poorer sections of the city while making their city centre flats exclusively for the well-off?

Labour has abandoned any attempt to create balanced communities in Manchester and treated with lofty contempt people whose votes they believe can be taken for granted. They constantly produce leaflets announcing that all their obvious failings are down to “cuts”, but ask yourself this: “How have Conservative councils with the same “cuts” elsewhere managed their finances to produce infinitely better local services than Manchester?” Responsibility has to be taken for 25 years of uninterrupted local mismanagement.

Labour makes many pronouncements about reducing the city’s carbon footprint - producing targets it is unlikely to keep - but has been lacking in ideas about ways to producing a greener, cleaner city while encouraging economic growth.

The Conservatives are committed to fighting for the interests of everyone in Manchester left behind by Labour. These are some of the things the Conservatives has already achieved:

- A 15% VAT cut for hospitality and tourism

- A £3.6 billion Towns Fund helping to shape our town centres the way communities actually want them

And these are some of the things the Conservatives with local representation are determined to achieve in Manchester. We will:

- Level up the suburbs to the same levels of prosperity as the city centre by proactively distributing investment. We will transform some of the most run-down areas of the city into special enterprise zones as a part of our “Manchester Start Up” vision.

- Encourage more parts of national government to be moved to Manchester. We want a city which is recognized as being at the beating heart of the United Kingdom.

- Tackle crime. Under Labour, Manchester has one of the worst crime rates in Britain, with just 3% of crimes prosecuted. Agonisingly, a pet dog is stolen every three days in Manchester with what seems to be total impunity for the perpetrators.

- Work for balanced communities throughout Manchester by insisting that all new housing developments in the city centre incorporate affordable *in the city centre* and do not attempt to off-load affordable housing quotas to poorer areas simply to increase the profitability of faceless corporations who have no interest in developing communities.

- Labour treat our precious parklands like bothersome encumbrances, leaving its gardens to run to ruin, its paths crumbling and its lawns abandoned. We will restore the city’s parks, tend their gardens, upgrade play areas and clean its monuments.

- We will clean the city’s air without placing a financial burden through congestion charges on ordinary commuters. Instead we will introduce a scrappage scheme to help people switch to low emission vehicles; install new charging points to make it easier to own electric; and bring in a green reward scheme so you can choose the least polluting businesses and services.

- We will transform Piccadilly Gardens - turned into a monument of depressing concrete ugliness by Labour - and make it once again a green showpiece green of the city that everyone can enjoy.

- We will devote resources into the city’s heritage. Manchester City Council has the worst record *in the country* when it comes to looking after our civic heritage, having never conducted a single assessment of any one of the city’s 34 conservation areas in nearly 50 years. We will transform magnificent heritage areas like Victoria Park - woefully abandoned and neglected by Labour - and return them to living historical destinations for tourists and residents alike.

- Encourage better educational opportunities for children of every social background, by promoting partnership schemes between the region’s best-achieving and failing schools. Everyone can be invested in prosperity when we encourage the horizons of the young.

On May 6, YOUR vote can have a critical difference to the political future of Manchester. Do not accept yet another year of abuse and neglect of our city.

Vote Conservative and let’s foster a new age of pride and opportunity in Manchester.

I have decided to step down as Chairman of the Manchester Federation on October 30.