Sir Anthony Eden was the first British prime minister to confront the stark limitations of British power after the end of the Second World War, during the new postwar era of Pax Americana which accompanied the twilight years of the British Empire. He was also the last British prime minister to act independently of the United States on the world stage. During the early years of the Eisenhower presidency and the last years of the second administration of Winston Churchill, British and American interests in the Middle East conflicted.

Eden, as foreign secretary, tried to build an alliance designed to protect British interests in the Middle East and southwest Asia, and to keep the Soviet Union out of the region. President Eisenhower, however, was determined to end what he saw as “British colonialism” in the Muslim world for fear that this would drive Arab nationalists into the Soviet orbit.

Eisenhower was too obsessed with the geopolitics of the Cold War to see the dangers posed to the West by Islamic imperialism and third world dictators. Eden understood that, in the age of the nuclear deterrent, the Soviet Union was less threatening to the international order than dictators like Egypt’s Nasser, who, like the mullahs of the Islamic Republic of Iran, was willing to challenge the West with his Muslim imperialist agenda.

Anthony Eden was the rising young star of British politics during the 1930s. Like his contemporary and successor as prime minister, Harold Macmillan, he served as an officer in the First World War and entered politics as a Conservative Member of Parliament after the fall of the Lloyd George government. Eden entered the cabinet as Lord Privy Seal and Minister for the League of Nations in 1934. A year later he became Foreign Secretary at the age of thirty eight, an office he held three times over the next twenty years. After his resignation from Neville Chamberlain’s government in February 1938, he joined the Conservative backbenchers who dissented to  Chamberlain’s foreign policy of appeasing Fascist Italy and Nazi Germany.

Churchill and Eden did not become close allies until Eden joined the wartime coalition in May 1940. Although Eden opposed the Munich agreement in October 1938, he was by no means an active opponent of Chamberlain’s appeasement policy. Whereas Churchill was in the political wilderness, where he was the lone voice opposing the rise of Nazi Germany for most of the 1930s, Eden was an insider whose differences with Chamberlain were more in policy detail rather than in outright opposition to appeasement. After returning to the Foreign Office in December 1940, Eden took a secondary role to Churchill in the conduct of British relations with America and the Soviet Union. Eden was an Arabist, while Churchill was a Zionist. Eden was a Continentalist in favor of appeasing Stalin and Charles de Gaulle, while Churchill was an Atlanticist in favor of appeasing Roosevelt.

For full article go to: https://www.manchesterconservatives.com/viewpoint 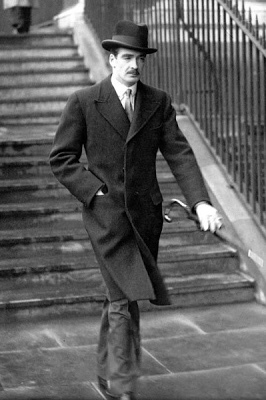