An Important Message from Didsbury Conservatives 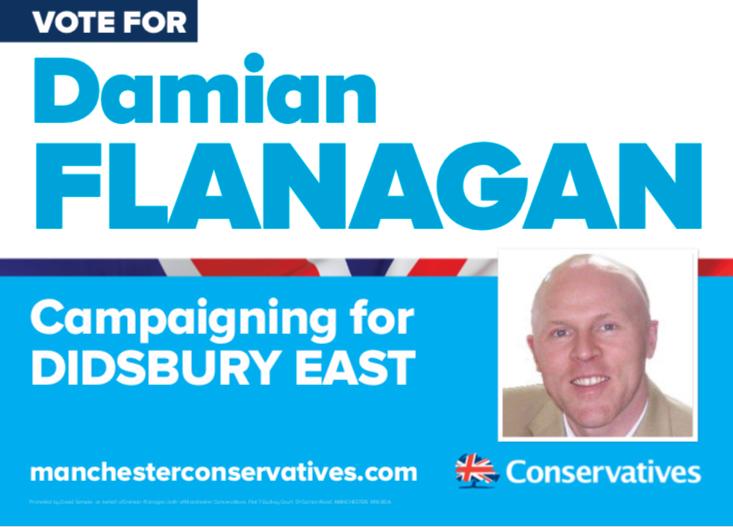 On May 2, only your vote for the Conservative Party candidate, Damian Flanagan, can finally break through the complacency of Labour’s near ONE PARTY STATE in Manchester Town Hall. It is vital to come out and vote to end Labour’s strangehold on our beloved city.

Damian is a businessman, award-winning author and journalist who has lived in Didsbury for over 20 years and is a political activist who has campaigned for true democratic accountability in Manchester.

The only answer the Labour Party seem to have to all the problems in Manchester - the worst crime rates in the country, congested roads, poor planning, underperforming schools - is to blame everything on “cuts”. Can’t they take responsibility for anything themselves? They have had almost complete control of our council for decades, yet we are still one of the poorest cities in the country, with 35.5% of children living in poverty according to council’s own statistics.

Do you believe the Lib Dems can provide any true opposition? They recently announced that their chief complaint with the 94 out of 96 Labour council was that it was too “right wing” and they hope to shift it further to the left. Is this supposed to make our city a more prosperous, flourishing place to live?

Through our own forward-thinking vision, prudent financial management and sense of community we CAN turn ourselves into a city that the rest of the country will admire.

Didsbury East is Manchester’s jewel: a suburb whose heritage, vibrancy and green spaces make it one of the most desirable places to live in the North West. If elected, I pledge that I will campaign to:

Please make the difference, vote for meaningful change and elect Damian Flanagan on May 2.

Didsbury Conservatives: the True Force for Change in Manchester

For details of meetings and social events of Didsbury Conservatives, or to inform us at any time of any local issues or concerns, or need a lift to vote on Thursday 2nd May, please email us at: Didsburyconservatives@gmail.com